Photography is, for me, an expressive medium and a relief valve. Not only instant but, in parallel and self-taught, after recovering a Ferrania and a Canon, the first black and white rollers and the need to have control of the whole process. Hence the setting up of a dark room, the transition to color and to the cibacrome print.
All this led me to reinterpret the original shot and vision. I realized that I had something beautiful in my hands that would help me to express myself in a definitely captivating language. Polaroid, instant photography, creative photography have played a fundamental role to date.
The techniques that belonged to me most were the manipulation through incisions and emulsion movements in the first minutes of development and the transfer, or the transfer of the image from its original support to a sheet of noble cotton paper. Participation in national competitions and related admissions and awards helped me to grow.

What I produce is a reflective, almost gestural photograph. For each shot there is a project, a desire and a construction. Nothing is left to chance, for each image created a series of steps in succession, manual elaborations, coloring interventions, more exposures and each modification must return the weight of an even more conscious and even more determined choice.
The result of a series of conceptual stratifications, intended as their own visual projects. In 2008 Polaroid closed and fortunately, a few years later, the Impossible Project was born which reinvented instant photography after about 70 years after the invention of Edwid Land.
Initially it was not as reliable. Development flaws and complete loss of image led fans of the genre to step away from the new brand. Sensing that it was a purely artistic product, I believed in the potential of the product, taking precautions and enhancing its defects.
Immediately "pioneer", always away from home, traveling in the various Photoshop of Milan and Rome, the first courses and workshops as a teacher, exhibitions in some European capitals and then, subsequently, in Italy, gave me great satisfaction. I can say that I was among the first, together with a few friends, to introduce these manipulative techniques (multi layers, incision, lift off, mosaic lift off, transparences, craquele, manipulation) which are now available to new and / or reinvented teachers who initially slipped away, disgusted. 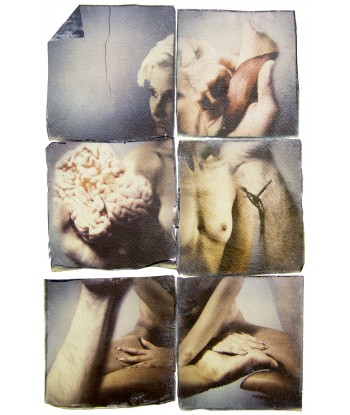